THE WOODLANDS, TX -- Much as we'd like to take credit for beautiful blooms in our gardens, the truth is we're just helpers in Mother Nature's global kingdom. Ranking FAR above us are insects. The more we know about them, not only the more successful we will be, the more we will enjoy the vast world in our own backyards.

Angela Chandler's The Garden Academy website has long been one of this area's best horticultural resources. Trust her to not only notice but share with our readers one of her latest excitements: a rare pink katydid. 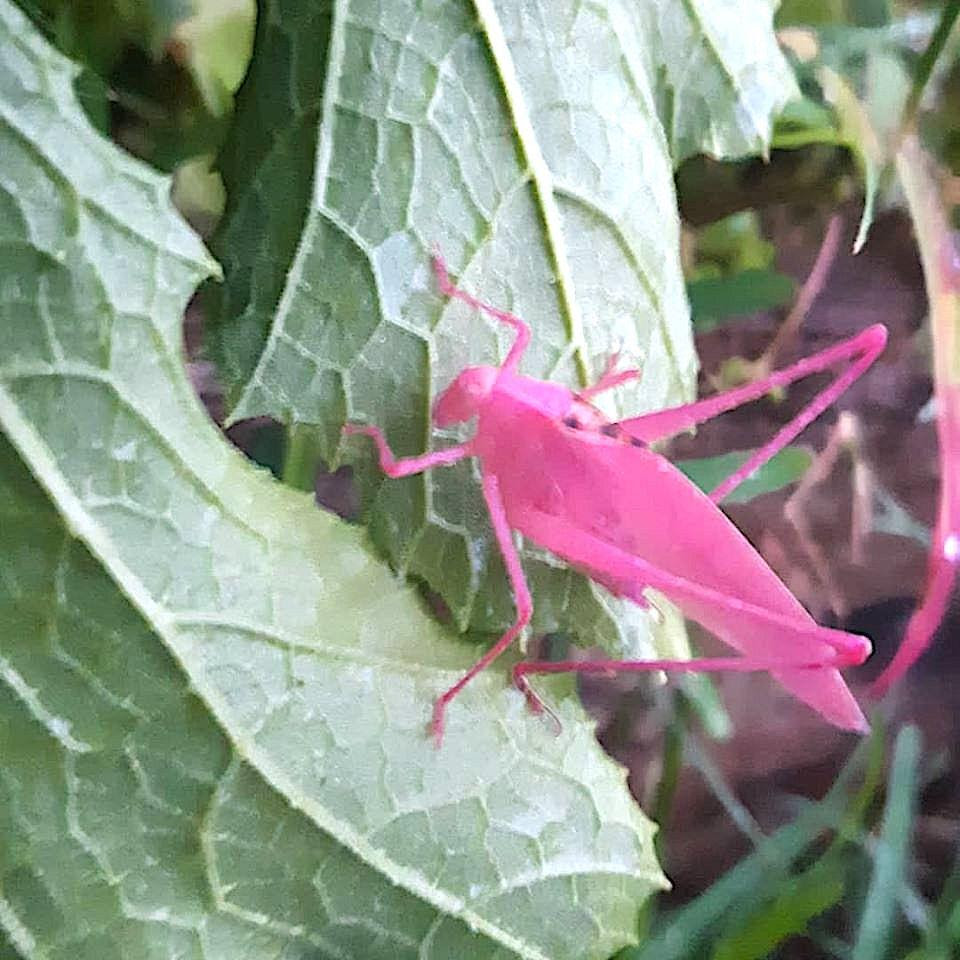 Amblycorypha oblongifolia (left) was spotted in the Chambers County garden of local singer/songwriter Christy Chandler. As Angela wrote, "Just past being newlyweds, Christy and her husband are enjoying their first veggie garden and all the discoveries it brings."
"The pink coloration," Angela wrote: "occurs in about 1 in 500 individuals. It is caused by erythrism, a genetic mutation similar to the one that causes albino mammals and birds. Several American insectaries have accomplished captive breeding of Pink Katydids since its discovery in 1874."
And, Angela adds, "There is also a rare orange version, which ought to get you Longhorns out scouting in your gardens!"
Read more at Gardening Know How: Katydid Facts: Managing Katydids In The Garden

PAULA BAZAN's beloved pipevine swallowtail butterflies are absent this year. In her multi-certified habitat yard, Paula grows this jeweled treasure’s favorite (and only) egg-laying site, Dutchman’s pipevines. In the past, Paula has had numerous broods by this time of year. She's seen other types of swallowtail butterflies, but this year, almost no pipevines. What’s going on?

A number of Houston naturalists and butterfly experts empathized with Paula. Joining Paula in noticing the scarcity of pipevines are:

Nancy has contacted butterfly enthusiasts in the Hill Country -- where pipevines are usually one of the most visible butterflies in the spring. Turns out they are far less abundant there too, an observation echoed by Carlos Hernandez, noted nature photographer and a member of Butterfly Enthusiasts of Southeast Texas.

I reached out to three well-known national gardening/nature experts to see what they have to say. Turns out, little birds in their nests don't always agree:

Still, a lot of folks are looking for answers. Lan Shen urged Paula to think about physical changes in her yard. Lan recalls the time her usually abundant swallowtails dwindled after building alterations were made, removing a favorite hanging site for swallowtail chrysalis. It took the pipevines 3-4 years to return to the same general area. But they finally did.

Lan also wonders if Paula has done any pruning lately of trees or shrubs where swallowtail chrysalis might be attached to limbs. (Paula said no changes or prunings were done, but you might want to keep this in mind.)

Joshua Kornegay of Joshua's Native Plants says Paula's question is being repeated by numerous customers. His answer: Not to worry. He monitors such trends through nationwide websites, especially now that his folks are complaining about missing pipevines. He says online, some areas across the nation are echoing our concerns; others are seeing more pipevines than usual. His own Heights-area Dutchman's pipevines were covered with caterpillars earlier this year, now there are none. He expects another onslaught later on.

Joshua says we're just used to butterflies like monarchs which predictably blanket large areas. Pipevines, Joshua points out, are less numerous and sometimes inconsistent in their geographic selections for egg-laying. 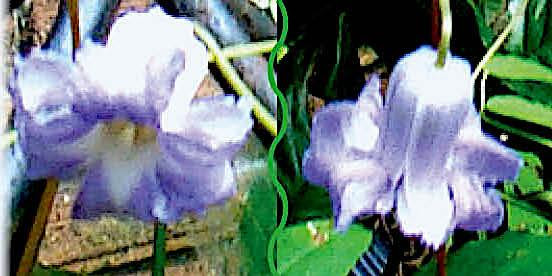 WOW NOW! PLANT SUBMISSIONS this week open with the fascinating clematis, specifically with garden clematis as opposed to one of our Texas native varieties. This is my nodding clematis right, lifted off an Aldine wooded lot's ditch top over 40 years ago. To my amazement, it transplanted easily to our new home . Repeating blooms are only about 2". (I just had to plug one of my most treasured plants!) 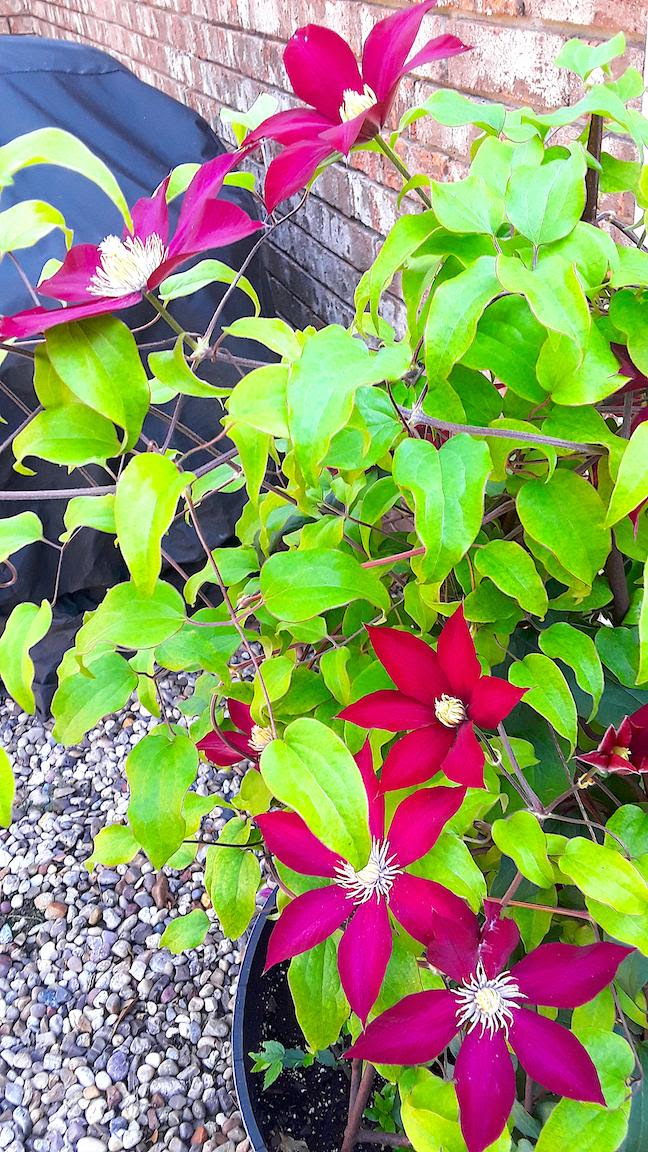 Sandra Nichols in Clear Lake City is rejoicing over her 3- to 4-year-old Bourbon clematis, left. As recommended, she chose a site with only filtered sun, in the shade of a big crape myrtle. Last fall Sandra needed to move it into full sun. Rather than dying, as she feared, it thrived and is now covered with 18-20 blooms, many 4-5" in diameter! Is it the full sun, she wonders, or just the plant's maturity?

Clematis, it's said, like their feet in the shade and their heads in the sun. Mercer Botanic Garden's Suzzanne Chapman said that's the usual advice for this traditionally short-term grower in this area, one reason you probably won't see them growing at Mercer, where the emphasis is on plants that do well here, especially flood-survivors!

If you want to try the large-flowered clematis, Jackmanii purple cultivars seem to do best, Suzzanne says, but definitely with some afternoon shade. 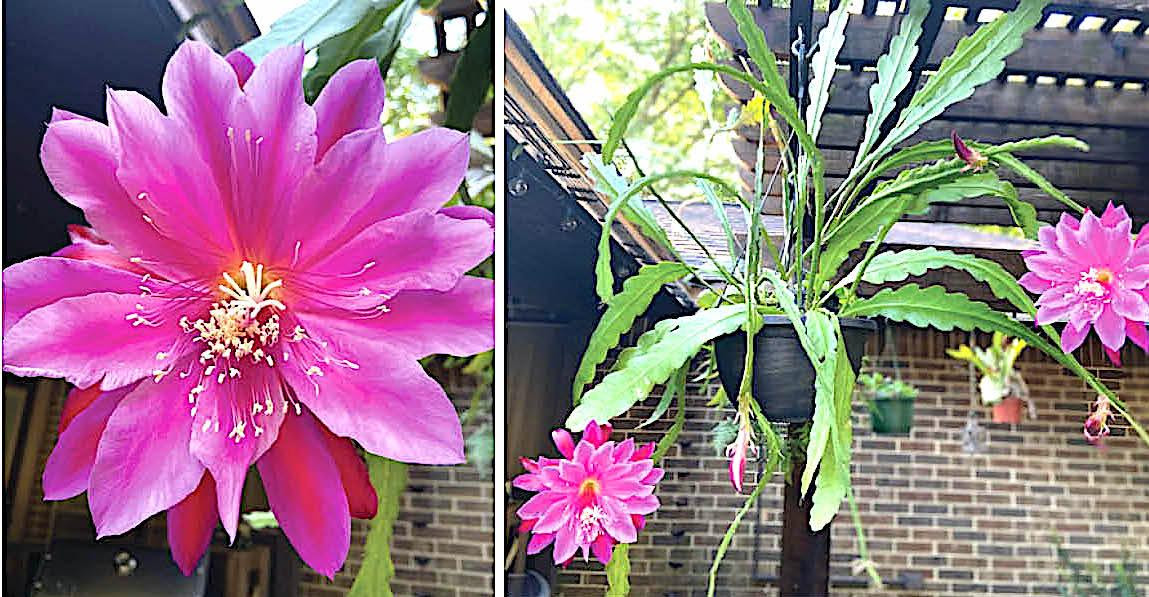 KAROLYN GEPHART cheerfully did night duty waiting for the 5 buds on her Giant Fuchsia Cereus to open. The first spectacular 7.5" florescence started around 11pm but lasted 2 days, as they all have, instead of the usual one day! Multi-shaded, shocking pink petals were luminous and, as Karolyn described it, "the extension of the stem from the flat branches was curious and beautiful," drawing oohs & ahhs from visitors. She has a white night blooming cereus on which blooms are withered by 8 or 9am after opening the night before. Her hanging baskets are in cactus/succulent soil in partial sun and are watered every 5-7 days.

Email "WOW NOW!" flower photos with your name, area of town
and info about the plant to: lazygardenerbrenda@gmail.com.
They should be in full, SPECTACULAR color right now.

ONE LAST THOUGHT ON 'MOLESTING PLANTS' in the May 15 newsletter. Kenneth Warren found this fascinating tidbit from an article that appeared in "Science": When pollen is scare, bumblebees can successfully trick plants into flowering up to one month early by nibbling on their leaves. When attempts to artificially replicate this 'trickery' in a lab failed, scientists decided something in the bee's saliva must be involved.

(NOTE: We do NOT recommend nibbling on leaves to induce flowering!)

NEWS FROM THE WONDERFUL WORLD OF SOIL AND PLANTS #121

Numerous reports from all over the world have shown a tremendous decline in the amount of water in our rivers and streams worldwide. A study in the journal Nature (2020) has found that groundwater pumping to irrigate crops and landscapes are a major reason. Groundwater often contributes significantly to the amount of water flowing in our streams. As a society we are running out of inexpensive and reliable water sources. The cost of water will continue to rise as population grows and a greater demand is placed on our water supplies
For example, The San Jacinto River Authority is looking at the possibility of raising water rates another 14.5% in the near future for the Conroe-The Woodlands area.

Many municipalities are now offering rebates for homeowners to replace water thirsty plants with beautiful low water use native plants (City of San Antonio, The Woodlands Township, etc.). Minnesota is paying homeowners to remove their lawns and plant urban wildflower meadows that not only save water, they do not require mowing, edging, fertilizing, etc. and they provide food for our beautiful butterflies and other pollinators. These pollinators then feed our beloved birds.

For those in The Woodlands, you can go to the Nature’s Way Resources website for a list of plants in our nursery that qualify for the rebate.

Experienced gardeners know that a high-quality compost is the single best amendment one can add to their lawns and gardens to have a beautiful landscape. A 19-year study by the University of California has found that a good compost also raises soil carbon not only on the top one foot of the soil but increased carbon to depths up to 2 meters (6.5 feet).
When they used both compost and cover crops, they found they could increase soil carbon content an average of 0.7 percent annually which is a lot! Journal Global Change Biology (2020)

As a gardener one of my favorite vegetable plants I love to grow is chilies of many types. I enjoy watching them grow and turn colors from green to black and finally a beautiful red. I love these peppers from stuffed bell peppers, to pickled jalapenos, to banana types great for grilling.
It has been known for years that the capsaicin in hot peppers has anti-cancer properties and many other health benefits.

An important day is coming up on June 23 which is “National Soil Health Day.” As pointed out in the organic agricultural magazine Acres, USA, its not national soil fertility day and that difference is critical. The word health is from the old English and old Norse words for something that remains whole, uninjured, sacred.

To celebrate, give your soil some love and apply some leaf mold compost today. If you want to find out more go to www.acresusa.com.

I frequently talk about the link between minerals (elements) in the soil and our health.  A study published in the journal PLoS Pathogens (August 2019) was on the importance of zinc (Zn). They found that zinc is an essential nutrient for our immune systems to fight off bacterial infections. Zinc has also been found to help the immune system fight viruses like the common cold.

Remember if you eat food with glyphosate (the active ingredient in the herbicide Round-Up) on or in them, (especially GMO products, your body cannot absorb zinc and other essential nutrients like magnesium from the food supply (assuming it is there in the first place).

The 2020-2025 Dietary Guidelines for Americans is currently underway. The organization Beyond Pesticides has a short summary of the health benefits of eating organic foods and why they are important. Also included is a link to send a message to congress asking them to include organic foods in the guidelines.

#6. Anti-bacterial everything (wipe out good bacteria and literally spread superbugs) 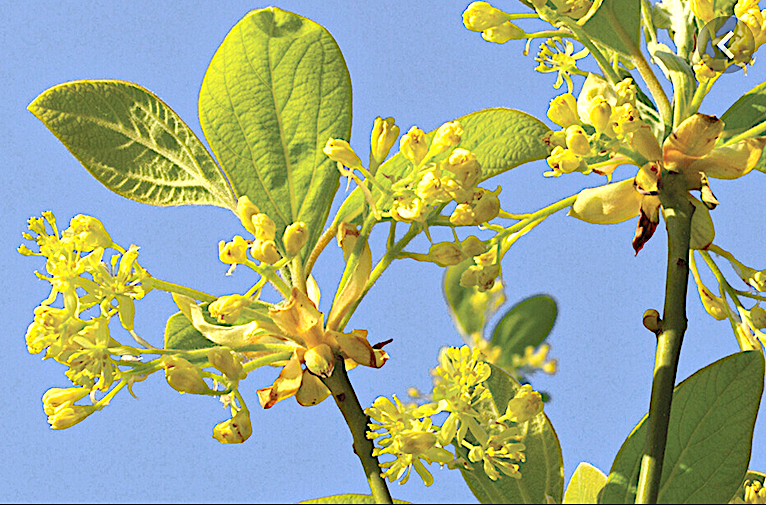 A sought-after Texas native tree, right, Sassafras triggers wonderful memories for those who grew up drinking its tea. For the uninitiated, its aromatic fragrance, dainty yellow flowers, bird-delighting fruits and spectacular fall color make this a popular residential choice. Plant in full sun or partial shade in moist, acidic, well-drained soil. Medium-to-fast-grower. Can reach 30'-60' with 25'–40' spread.

Gardening in July, 2020 in The Woodlands

What Causes Hot Spots in Homes?

Grasshoppers in your yard

How to Clean Composite Decking