PLANTS HAVE "A STORY" BESIDES "WOW" NOW

“There are no gardening mistakes, only experiments."
-- Janet Kilburn Phillips

THE WOODLANDS, TX -- When we started asking for readers' WOW NOW! pictures and reports, I wasn't prepared for the personal associations triggered by submissions, and I hope the same is true for all of you.

Dale Phillips triggered not only a wonderful personal plant flashback, but also one of our fascinating garden leaders: Dr. Ying Doon Moy. Dale reports his Dr Moy Grande is covered with "at least a dozen everyday of these giant hibiscus." Some of his cherry pink-to-read blooms measure over 12" across! 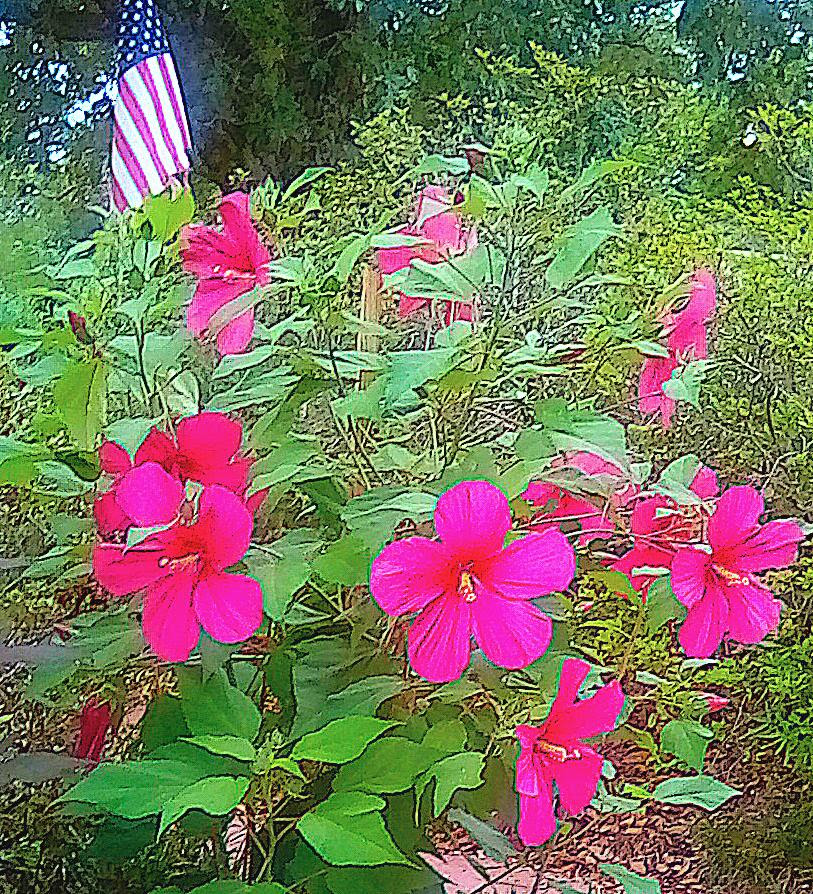 That was my experience too. Then suddenly, one day, I walked outside, and it had died. No idea why. I wanted another one but somehow never got around to getting it. Will now for sure!
Dale first Hibiscus x 'Moy Grande' died but he knows why. Following the Harvey floods, he didn't realize until it was too late that the pot it was in wasn't draining. The ground it sat on was too saturated. (A lesson for all of us!)

This one, bought this one last spring at Buchanans Native Plants, is planted in the ground. It died back this past winter as usual and, he reports, "grew like a weed from nothing to over 5' starting in April." Every day now at least a dozen flowers are in bloom, some over 12" across.

The plant's in full sun, west-facing, with a little morning shade, in a bed that for decades has been highly mulched with pine needles and oak leaves.. He cheerfully admits he feeds Moy Grande Hibiscus more often than he should with highly recommended Space City Hibiscus Society's Hibiscus Fertilizer.

Thanks, Dale, for reminding us about Dr. Ying Doon Moy, a survivor of indescribable hardships during WWII and the Chinese Cultural Revolution, who became an internationally-renowned geneticist with San Antonio Botanical Garden. Dr. Moy is credited with developing not only the Moy Grande Hibiscus but over 150 new species, many of which now adorn gardens worldwide. Don't you treasure plants so much more when you know their histories? 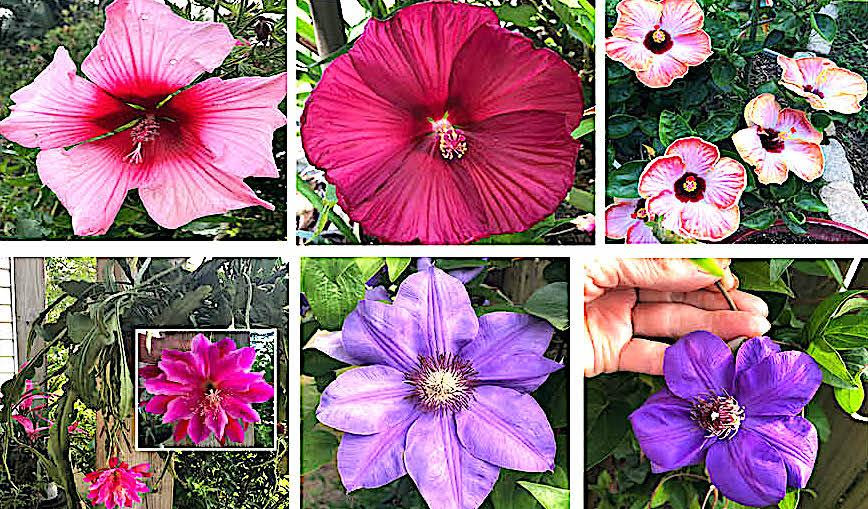 WOW NOW! IN CRYSTAL BEACH The first time we drove past Rita Moseley's yard in Bolivar Peninsula, so many different flowers were blooming interwoven in a small jungle-like enclave, no individual bushes identifiable. I left a note asking her to call. Rita's gardening cohort Gloria Bratton's is an equal treasure trove, including these NOW WOW! (2nd row above) pink Epiphyllum Ackermannii 'Orchid Cactus' and two different purple shades on the same vine. 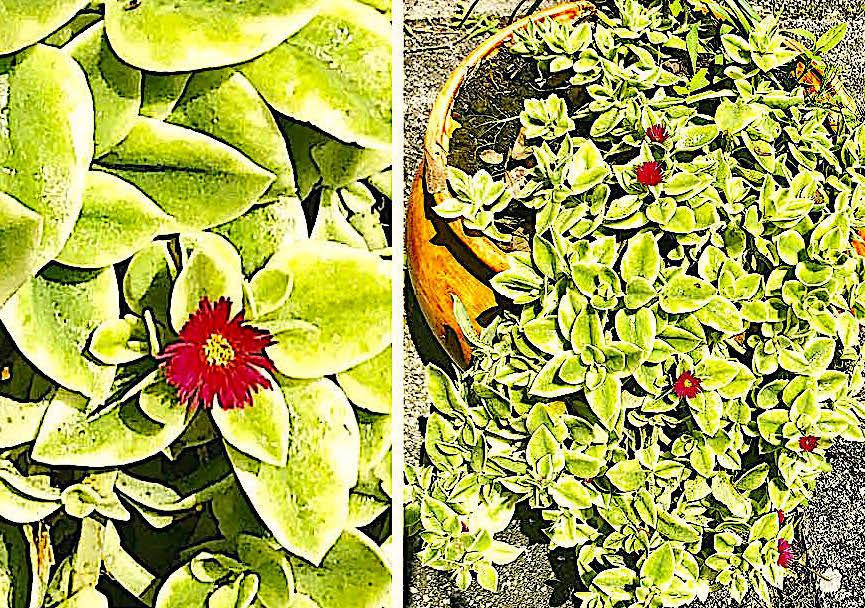 THIS DETERMINED ICE PLANT has spent the past three years in a very special pot on our front patio and has mostly only been watered by rain and has the most fascinating growth pattern. It would be pretty cascading equally all around the rim. Instead the whole thing (not just new branches) insists on growing en masse toward the sun. Turn the pot eastward and in a day or two the whole cascade is on the west side. Love independent plants! It's a Dorotheanthus Mezoo Trailing Red (aka ice plant).

SHARE YOUR "WOW NOW!" photos of flowers/varieties not
already shown. Email to lazygardenerbrenda@gmail.com. Be sure to include
name of plant, your part of town and notes other gardeners might find interesting!
Other submissions can be seen at natureswayresources.com/NLindex2020.pdf 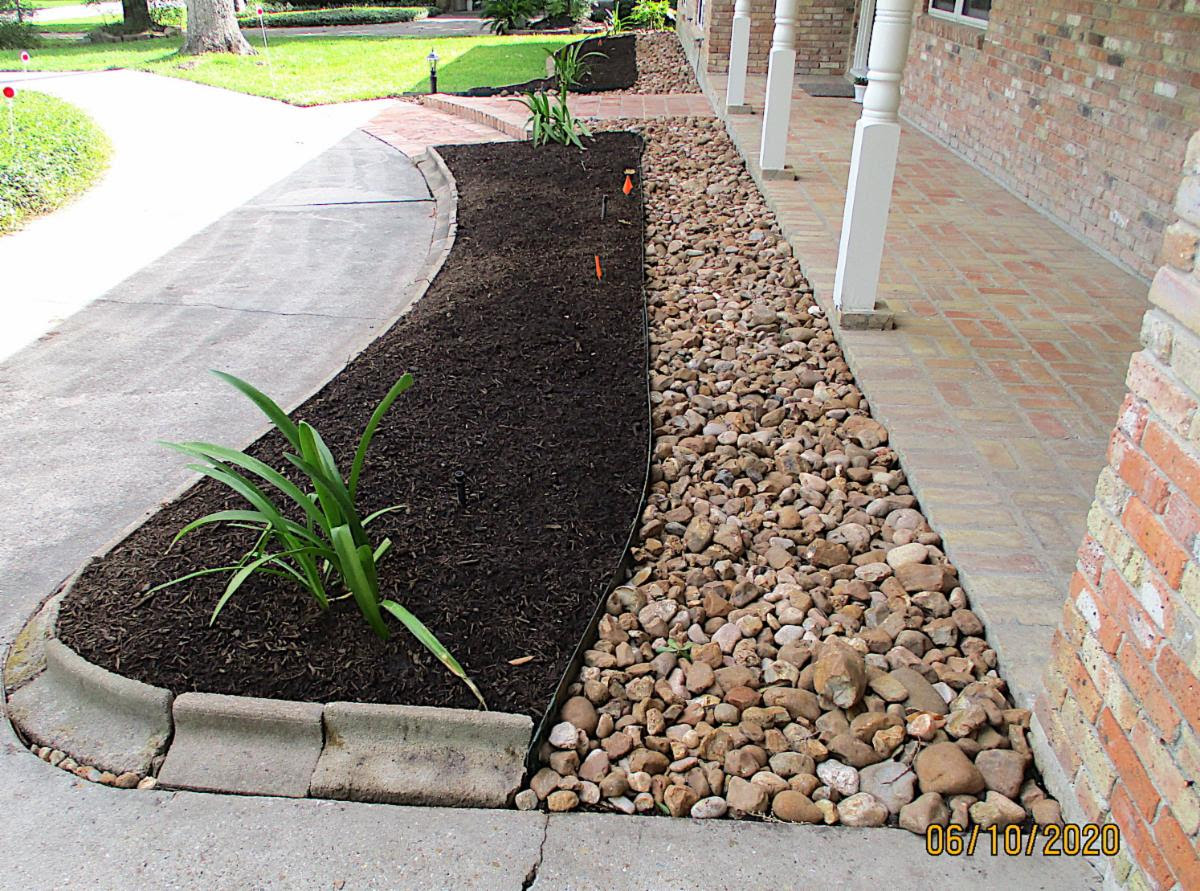 VICTORIA GRIFFIN's picture of her new front garden is worth sharing, as it addresses a potential problem too many gardeners overlook. Although this garden doesn't abut the actual house wall, providing adequate plant drainage without covering up foundation weep holes can be a challenge. With our monsoon rains and clay soil, it's essential to avoid pooling of moisture that could damage a house foundation.
This technique installed for Victoria, explains Don Dille of Dille Landscapes, is used to catch and disperse excess roof rain runoff. The area is bordered with steel edging, weed fabric is laid on the bottom and then filled with large bullrock (river rock). Excess water is allowed to both soak downward and flow out.
Garden mulch is kept away from weep holes, and spreading out excess moisture helps prevent foundation cracking, a major problem in every Greater Houston area. This also allows for more adequate air circulation around plants and soil levels can be raised in the planting area, providing much needed drainage during our monsoons.
The drain relief areas can be extended to attractively wander through lawns or gardens. Filled with moss stone, they create an attractive dry creek effect.

NEWS FROM THE WONDERFUL WORLD OF SOIL AND PLANTS #124

An emerging area of pest control is using scents from one insect to control another. The Max Planck Institute for Chemical ecology has discovered another mechanism of how this works.

Many insects use a plants scent to determine the best place for them to lay their eggs. They discovered that scents from the frass of feeding larva tells other insects that this area is already occupied and to find another location to avoid competition during egg deposition. (Journal of the National Academy of Sciences 2019).

A new study by Cornell University shows that when plants like the Golden Rod (Solidago altissima), when attacked by the goldenrod leaf beetle, it sends out a chemical signal that other plants of the same species can recognize. The other plants turn on their immune system so that they are all working to defend against this pest.

The Smithsonian Tropical Research Center has found that warm soils release carbon faster than cool soil. A vital component of healthy soils is humus which is chains of carbon atoms. In warm soils humus is destroyed at a much faster rate and released to the atmosphere as carbon dioxide. This is another good reason to keep our flowerbeds and trees mulched with several inches of a good aged (composted) Native Mulch to keep the soil cooler. Not only does it slow the breakdown of humus, it actually increases humus, as it continues to decompose.

Humic acid is a dark-brown humic substance that is only water soluble at high pH. These molecules are composed of medium to long chains of carbon atoms and may remain stable in the soil for years. Humic acids hold onto and help transport nutrients and water to a plant’s roots.

Ulmic acid is a dark brown molecule composed of 16-35 carbon atoms. It has recently been identified as a component of humus and its role in nature is still being determined.

Humin is a black humic substance that is not soluble in water, and is extremely long chain carbon molecules which is very stable in the soil for decades or more. Humins can compose over 50% of the organic matter in healthy soil.
A good compost will contain 5-8% of humus which is about 110-112 pounds per cubic yard. A high-quality compost will contain more humus and can have over 150 pounds of humus (humates) in a single cubic yard.

Whether from compost or mined humates, humus is a great way to improve the quality of one’s soil.

Another issue with our conventional food supply is contamination by toxic heavy metals from artificial fertilizers. The US Geological Survey has reported that the clean safe phosphate deposits have been used up, and the deposits being used now contain the toxic heavy metal we know as cadmium (Cd).

Additionally, new studies have shown that the phosphate used in artificial fertilizers now contains the radioactive element Polonium (Po). Polonium-210 is produced by the decay of uranium and is found in nature in small amounts.

Polonium is the same element found in tobacco smoke that causes lung cancer as it is a powerful carcinogen. It is chemically similar to the essential element selenium hence easily absorbed by plants.

According to a study the Oak Ridge National Laboratory (1983), eating food including meat and dairy products raised using this type fertilizer exposes one to the same amount of radiation as smoking cigarettes.

A book on the discovery of this practice and the governmental cover up can be found in the book:

Fateful Harvest by Duff Wilson, Harper Collins Publisher, ISBN 0-06-019369-7, A history of how hazardous waste is disposed of in synthetic fertilizers and ends up contaminating the food supply. Wilson was an investigative reporter for the Seattle Times Newspaper and published a series of articles in July-August 1997-1999.

Research continues to explain that soil health is directly related to human health. Microbes in the soil and natural environment evolved with us and have the power to communicate with us. We know that soil microbes play an important part and help regulate our emotions and immune response.

We now know that an active and healthy soil microbial community helps plants grow and protect them against insects and disease. More and more research are showing that the toxic chemical methodology of agriculture is screwing up the bacterial and fungal populations in the soil and that it reduces the quality and nutrients in our food.

One of the biggest health issues in our society today is inflammation caused by oxidation, which is behind many health issues. For example, researchers in the Food Health department at Pennsylvania State University have found that one anti-oxidant they call Ergo (l-ergothioneine) is only made by soil fungi!
When a fungicide is applied or when soils are tilled the required fungi are destroyed, hence our food no longer contains this important anti-oxidant.
A good introduction for homeowners on the link of soil care and human health is the book written by Daphne Miller, MD and a clinical professor at the University of California and the author of the book “Farmacology: Total Health from the Ground Up”, ISBN: 978-0-06-210315.

Researchers at Bowling Green State University have found another cause of the toxic algae blooms in our lakes and streams. This is backed by additional research by Ohio Northern University. They found that the herbicide glyphosate (active ingredient in Round Up) was the cause. Many species of cyanobacteria have evolved to use the phosphate in this chemical as fertilizer (food). A study in the Northeast USA found that this chemical causes or feeds 20-25% of the toxic algae blooms that occurs each year.

In this newsletter we have often talked about the importance of minor and trace elements in re-mineralizing our soils for all plants but especially when we are growing vegetables and fruits. If these 79 elements that are found in the human body are not in the soil they do not get into our food.

Most food items (unless they are organic) has the herbicide glyphosate in and on them, with GMO products having the highest levels. When we eat this contaminated food with glyphosate, it prevents the absorption of the essential nutrients like magnesium, zinc, selenium, and other elements required by our immune system to fight off viruses.

The report below is from dozens of MD’s and PhD’s doing research into Covid-19 prevention that has linked the lack of these essential elements to severity of the disease along with vitamin D which requires these elements to work.

HOW WE CAN FIX THIS PANDEMIC IN A MONTH

HAVE YOU TRIED...
is taking a break. It will return soon!

How To Calculate Roof Slope Without Falling Off The Roof

Gardening in August in The Woodlands

Tips On How To Lower Your Air Conditioning Costs This Summer